Go behind the scenes of our new Béret KODJIA collection and THE POWER IS YOURS campaign. 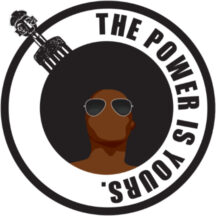 Go behind the scenes of our new Béret KODJIA collection and THE POWER IS YOURS campaign.

``THE POWER IS YOURS.``
French Deal was born from the fusion of hip hop, fashion and the celebration of Africa. The brand now invites women into its men's wardrobe with the launch of KODJIA berets.

Unisex pieces with a committed style, these accessories combine French know-how and African craftsmanship. Creative Director Steeven Kodjia signs this collection inspired by black culture and shares his vision in the new campaign: “THE POWER IS YOURS”.

“THE POWER IS YOURS” highlights the history of the Black Panther Party and the struggle of great African and Afro-descendant leaders.

The Béret KODJIA represents this tribute. It gives power back to the people. 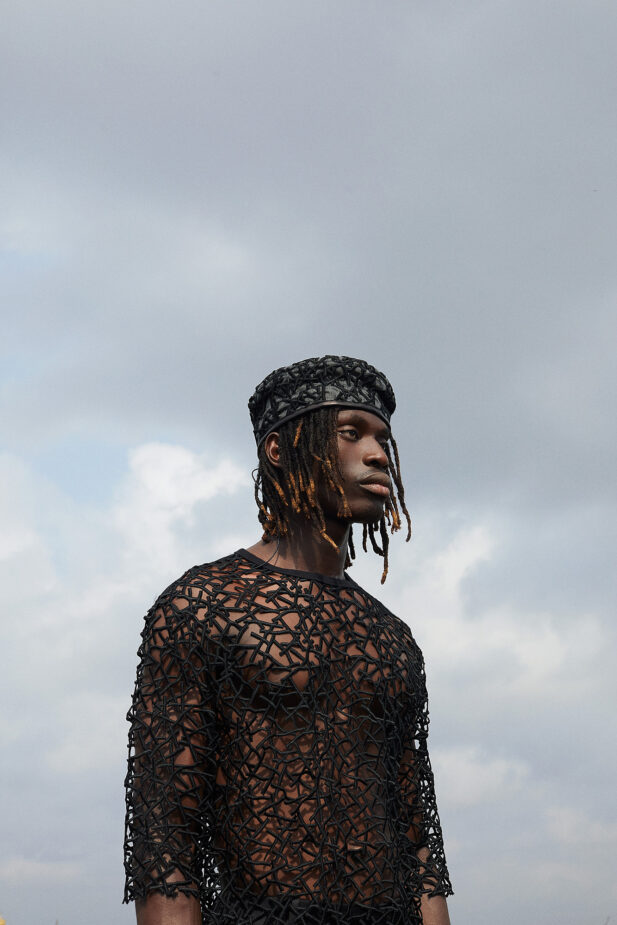 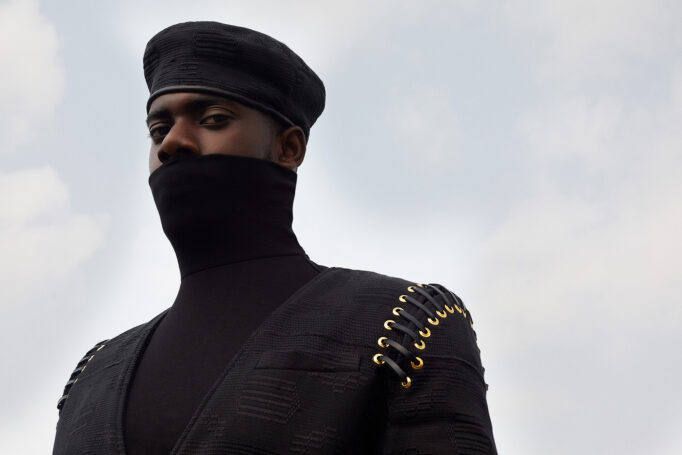 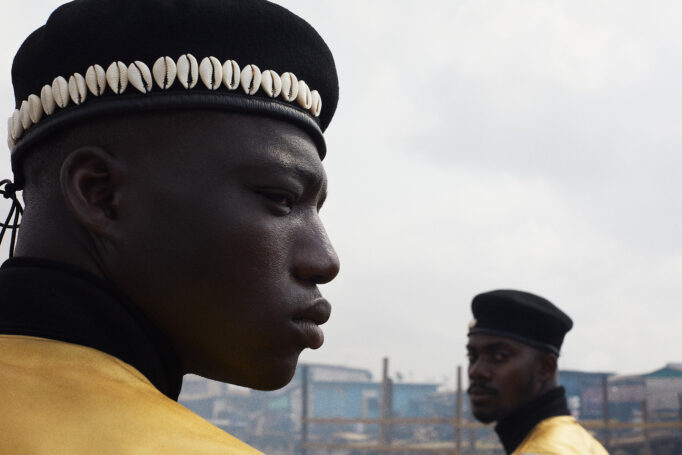 Enter the world of KODJIA berets…

…by watching the Fashion Film “THE POWER IS YOURS.”

Shot in the land of Ghana, this film offers a unique interpretation of the beauty of African culture.

LET YOURSELF BE GUIDED

A word from the Creative Director

“A meaningful tribute, to be shared with future generations.” 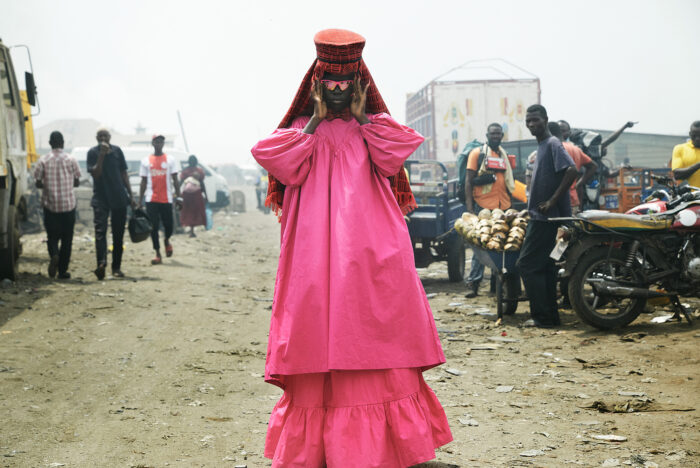 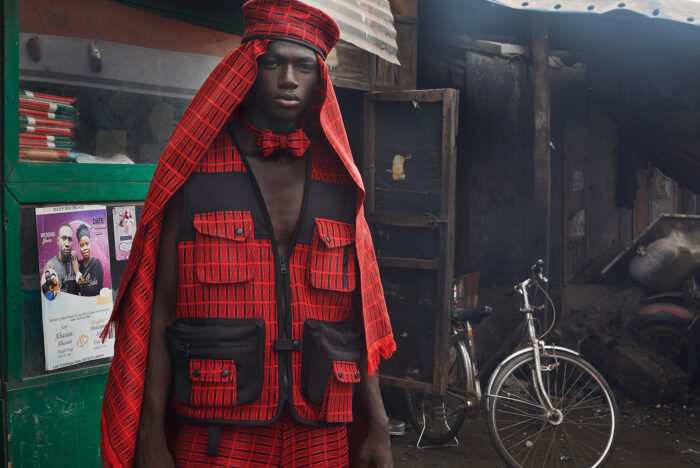 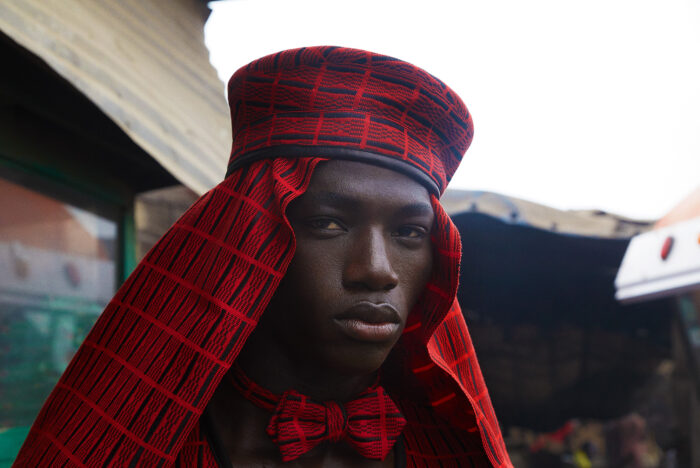 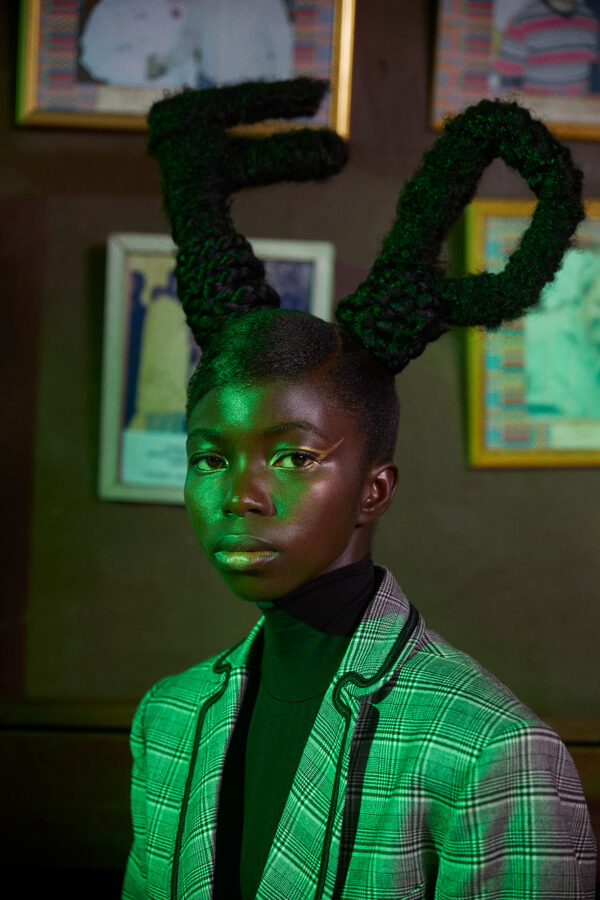 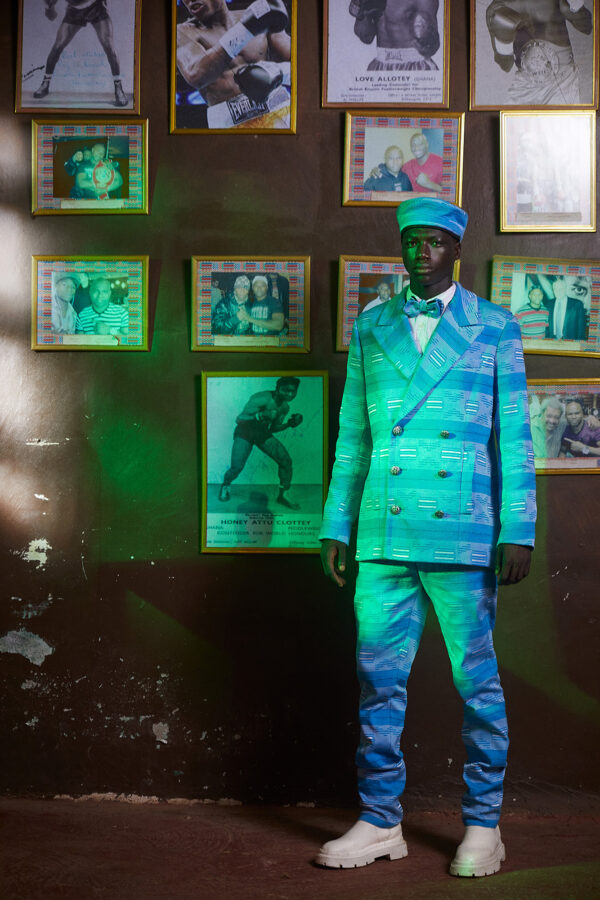 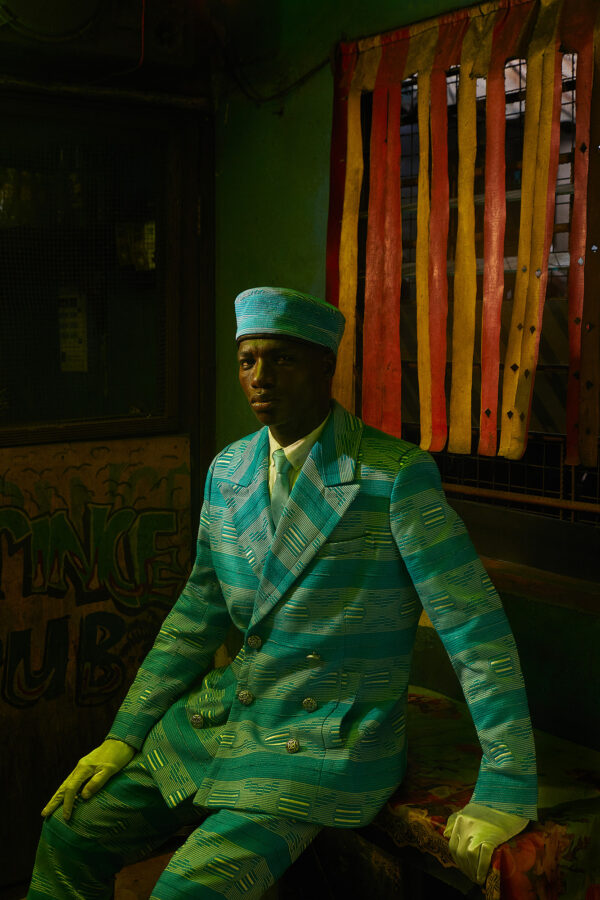 COWRIES
AND THEIR SYMBOLISM

During the process of creating the KODJIA Beret, it was important to the Creative Director Steeven Kodjia to add an element representative of the land of Africa. Cowries have become a symbol paying homage to the richness of our cultural heritage. These small, rather ordinary-looking seashells, carry with them a real history and strong symbolism on the African continent, especially in West Africa. The House of French Deal has chosen to pay tribute to two of these symbolisms. 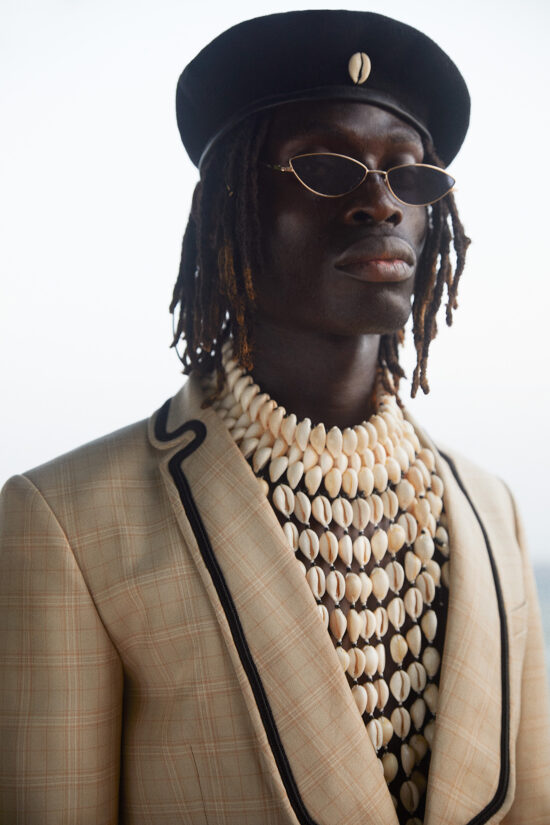 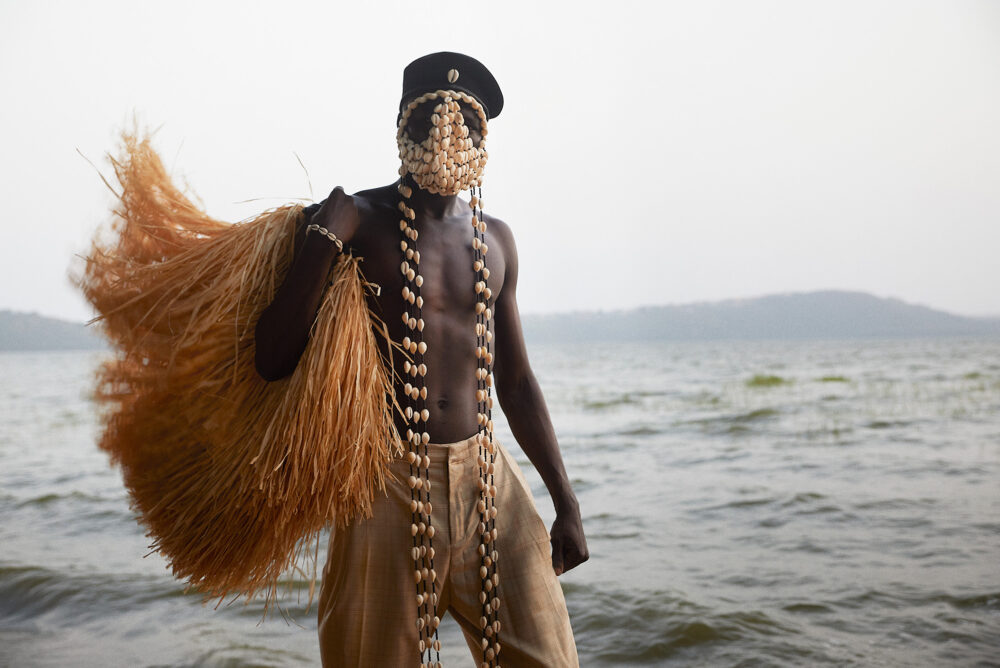 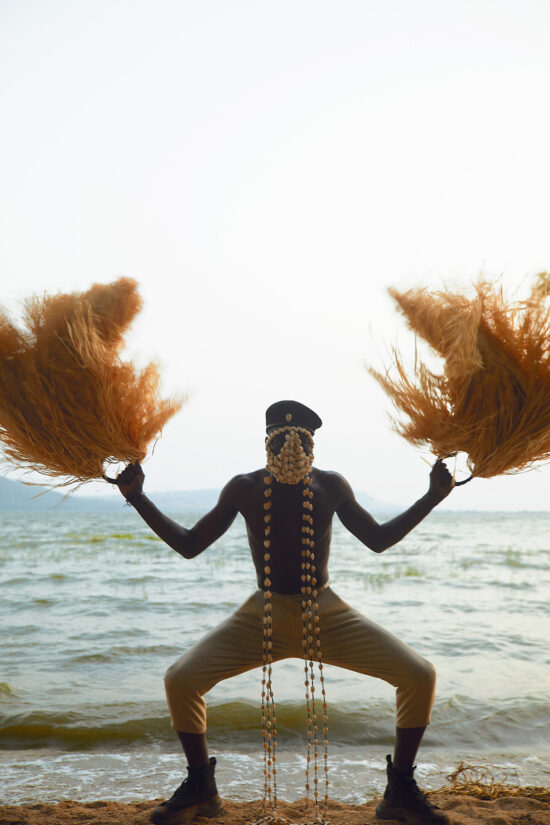 THE COWRIE SHELL: A HISTORIC CURRENCY

Cowries were introduced to West Africa long before colonization. These shells very quickly became the main currency of trade.

Indeed, the cowrie had all the characteristics inherent to a monetary currency: easy to manage and transport thanks to its lightness, non-perishable, and usable for both modest and large payments. Its unique shape made this shell instantly identifiable and difficult to counterfeit.

In the Villages
Conducting commerce was the responsibility and privilege of the ancients. They used cowries for the purchase of necessities for the community such as tools, medicine, or livestock. Trade on a larger scale was the specialty of several ethnic groups, in particular the Hausa, Dyula, and Yarse. Thanks to cowries, they participated in the exchange of goods on a large scale.

In the Great Empires
The use of cowries helped promote long-distance trade. Seashells quickly began to replace gold (which was becoming increasingly scarce) in everyday monetary circulation. The cowrie has thus become an element of value and a symbol of wealth.

During Colonisation
Later, the Europeans sought to impose their own monetary currency to replace cowries. They aimed to divert trade from the British Gold Coast to their own colony in Ivory Coast. Compared to banknotes, they found cowries to be bulky to store and difficult to count. However, the task was more complicated than expected, as Africans wanted to keep their currency rather than joining a new, centralized currency.

When the French banned the use of cowries in the early 1900s, the elders resisted, refusing to include the new currency in their reserves or use it in their ceremonies in place of the beloved shell. The ban on the use of cowries, however, has not changed people’s habits much. The attachment to the shell, its great availability on the market, and the depreciation of the French franc (unlike cowries which had retained their value) contributed to the resistance of West Africans until the 1940s.

In Our Time
Today, cowries are no longer used as official currency on the African continent but leave behind traces of their history. In some countries, like Burkina Faso, locals occasionally give cowry alms, alone or mixed with coins. All over West Africa, it is still possible to pay for ritual services with these shells. The cowrie is also used to adorn ornaments, decorations, and objects of divination. 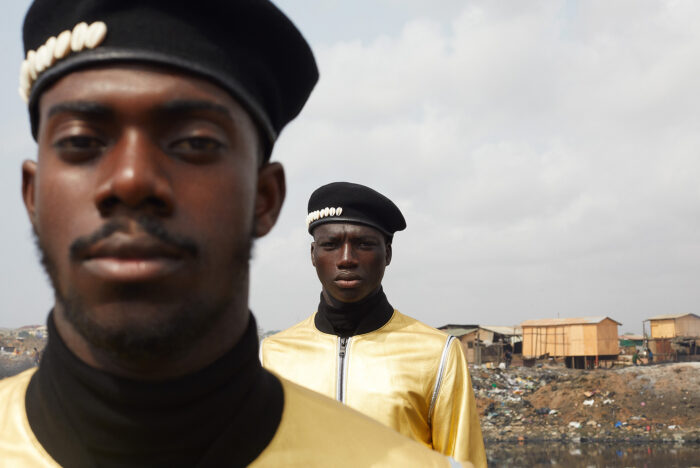 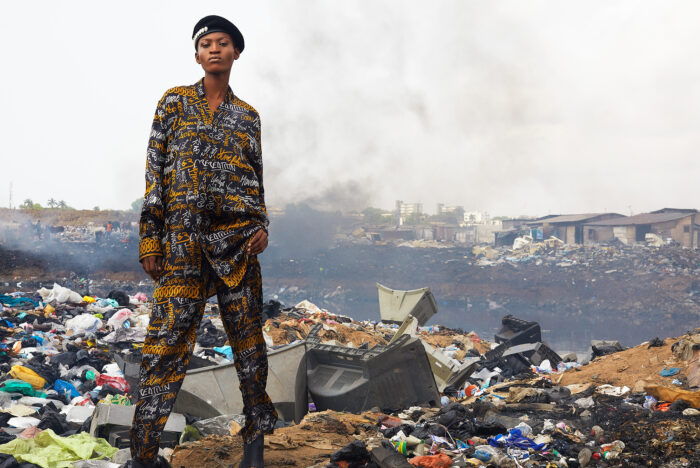 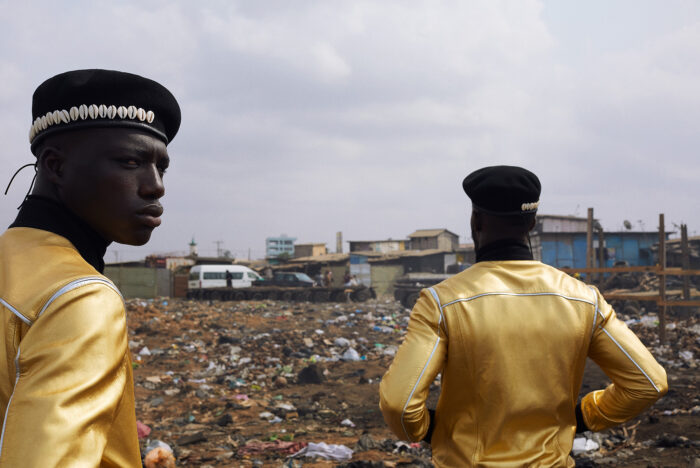 The Divinatory Art
The use of cowries for divinatory art is arguably one of the oldest practices in the world. Common throughout West Africa, cowries are a way to read the future and find answers to questions.

During a reading, cowries work in pairs. The person seeking answers thinks or whispers their question, then blows on the cowries before throwing them onto a circular surface. The cowries are then interpreted according to their distribution and position (face up or down). Depending on various beliefs, this allows to get exact answers about the inquirer’s private life or a crucial decision.

Cowries are also lucky charms adorning the outfits of hunters and warriors, and braided into sacred masks and ceremonial dance costumes. They may also be used in traditional medicine to accompany the deceased on their journey as they leave this world.

Lastly, the slit on the underside of the shell may resemble a black pupil against its pearly surface. This is why it’s often used to protect against the evil eye.

Religious Art
The religious value of the cowry led animist priests to make costumes entirely or in part out of cowries to be worn during ceremonial events. The sacred power of these small seashells only sublimates their beauty. 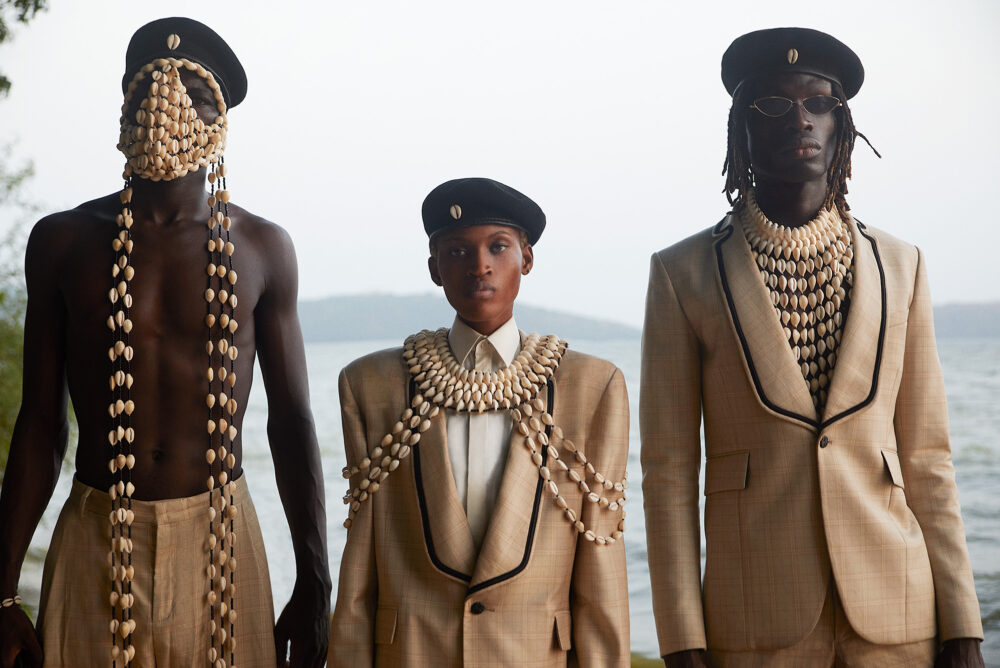 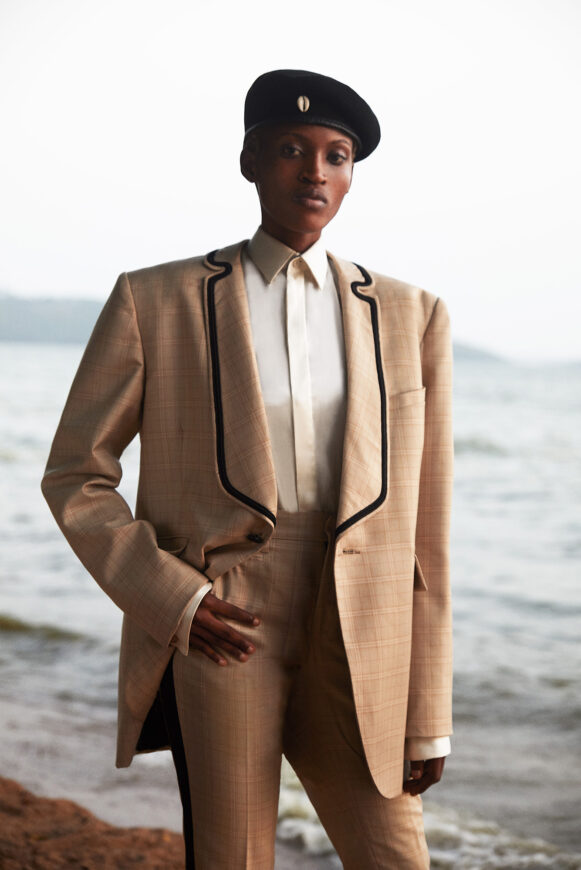 To each great man, his story.
To each story, its heritage.
To each heritage, its tribute. 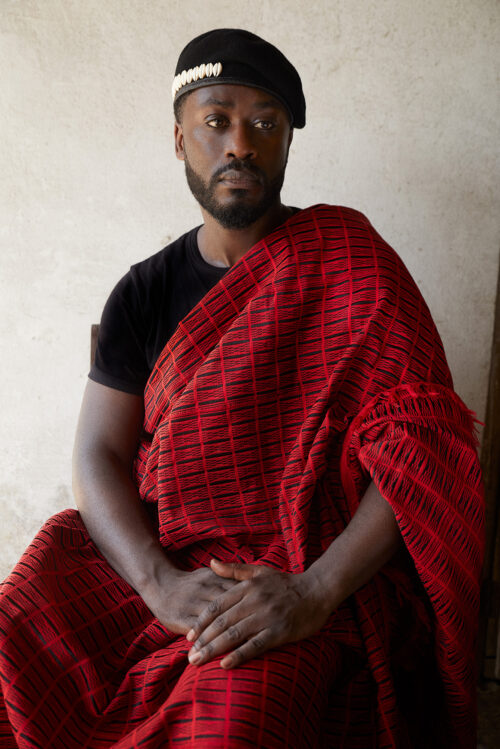 We pay tribute to one of our African leaders: Kwame Nkrumah. In celebration of him, the “THE POWER IS YOURS.” was filmed in Ghana. Kwame Nkrumah was a statesman and the first president of Ghana as an independent country. One day, he uttered a powerful phrase which still resonates today in the heads of all children of the diaspora: “I am not African because I was born in Africa but because Africa was born in me.”.

The Creative Director of the Maison, Steeven Kodjia, forever carried by this symbolism, naturally wishes to pay homage to this man and highlight the noble heritage of the continent. 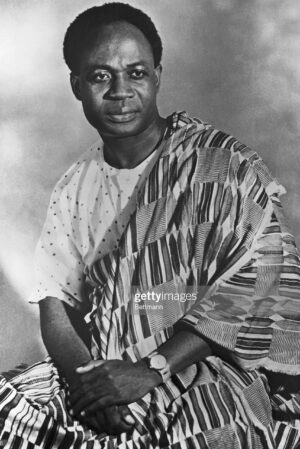 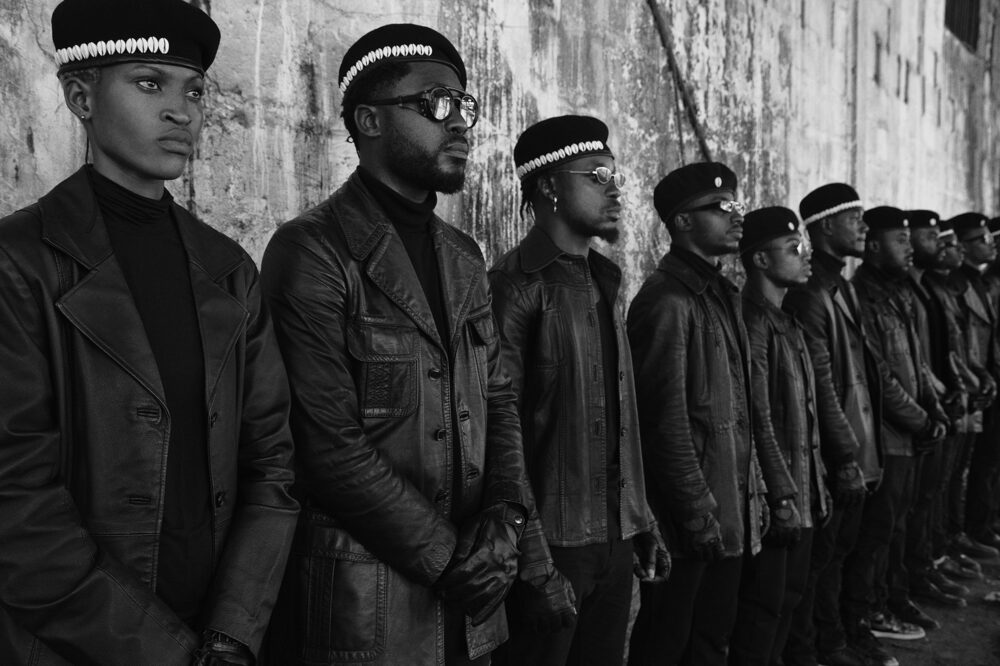 Around this same time, across the Atlantic, Bobby Seale and Huey P. Newton founded Black Panther Party for Self-Defensein Oakland, California. Thanks to their fervor and concrete actions for the freedom of the Black community in the United States, the Black Panther Party has strongly influenced the world and remains a universal symbol of struggle.

Taking inspiration from the Black Panther Party, Steeven Kodjia therefore decided to reinterpret it in his own way. Ideologically and stylistically, the revolutionary movement is the primary source of inspiration for the “THE POWER IS YOURS.” campaign. 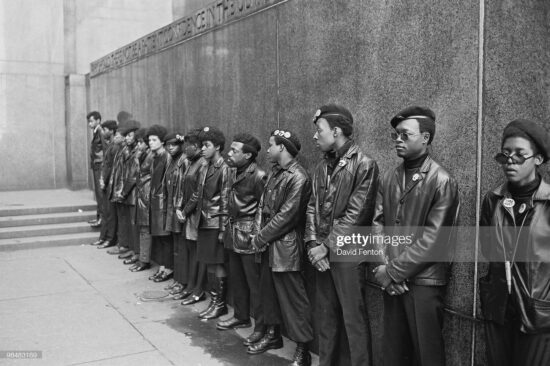 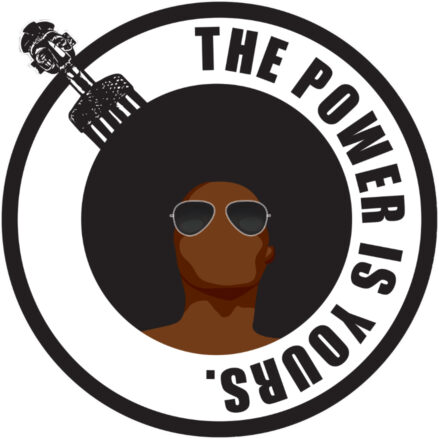 Each point contains two sections:
– A first section entitled “What We Want” states what the Black Panther Party wants, such as freedom, work, decent housing and education.
– The second section titled “What We Believe” expands on the first section by demanding what they see as sufficient compensation for all injustices committed against the black community.

Very explicit and comprehensive, this program quickly became the solid basis of the Black Panther Party and regarded as the document defining the actions of the party.

In 2021 in France, Steeven Kodjia transposes this program to the present, integrating these ten commandments into the DNA of the Maison French Deal.
Discover the POWER Program. 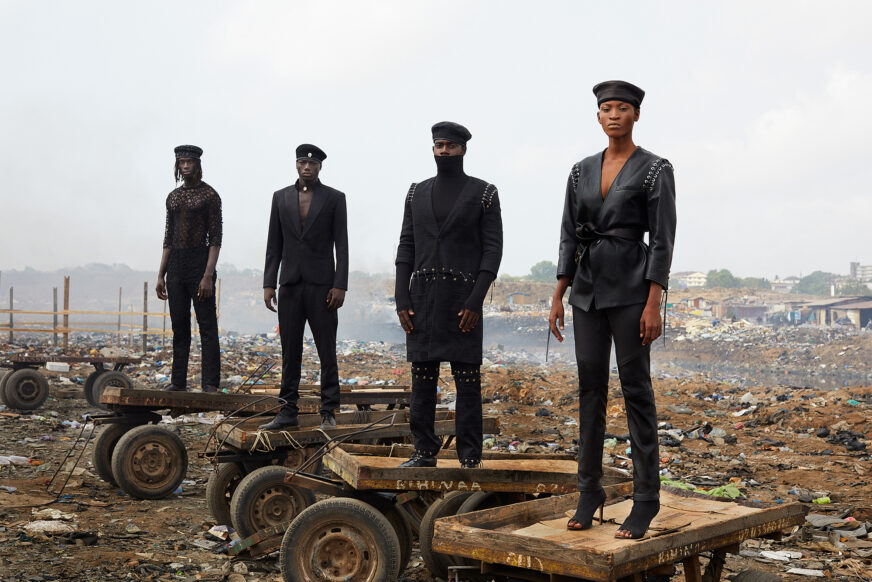 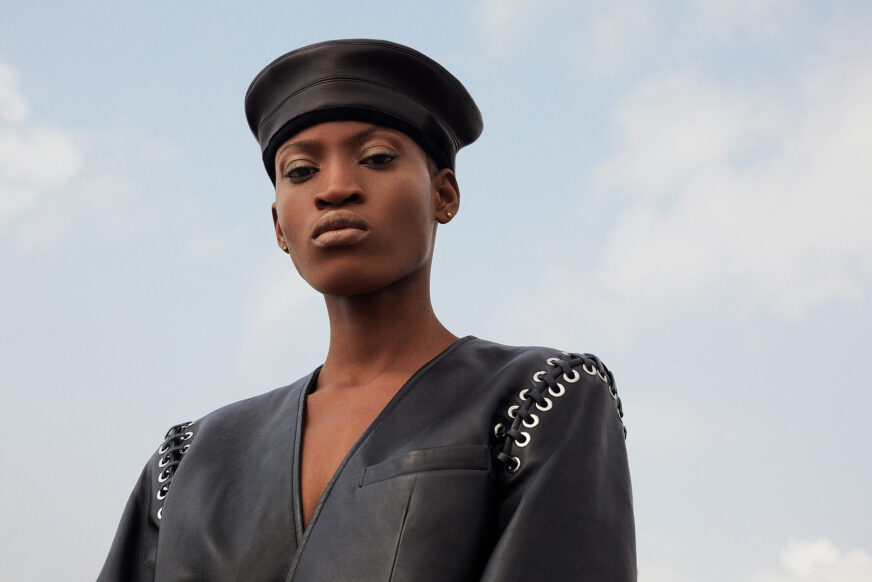 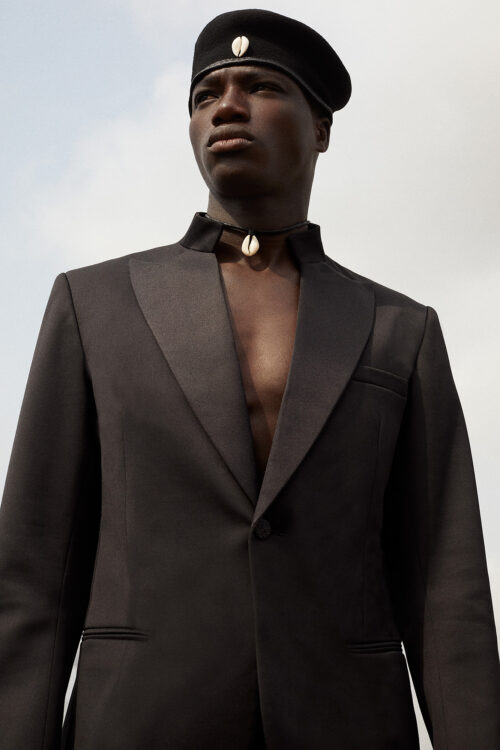 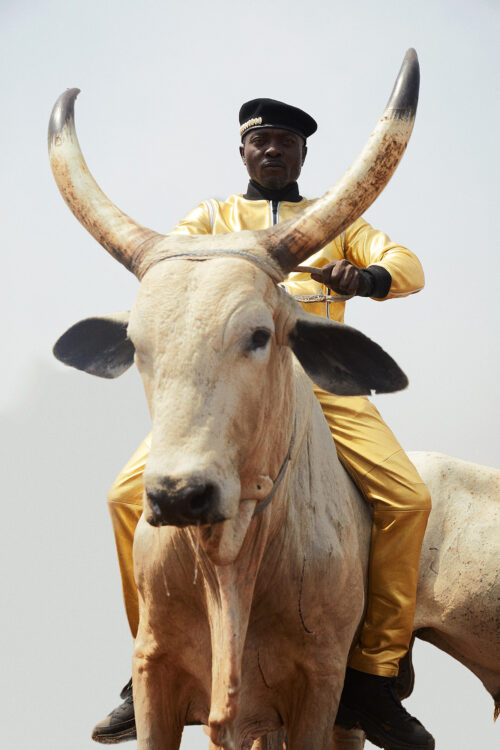 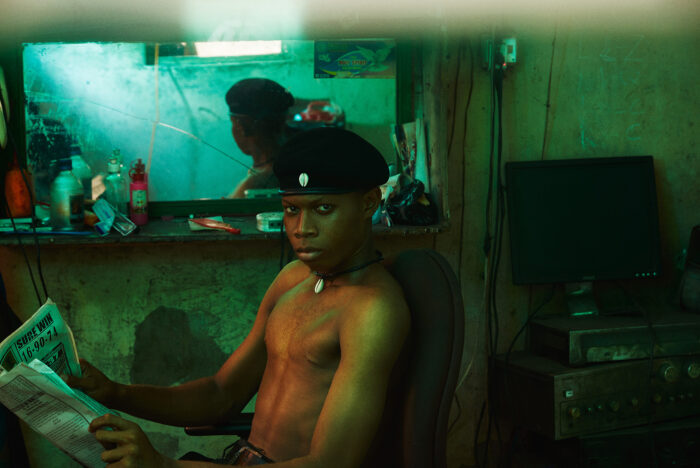 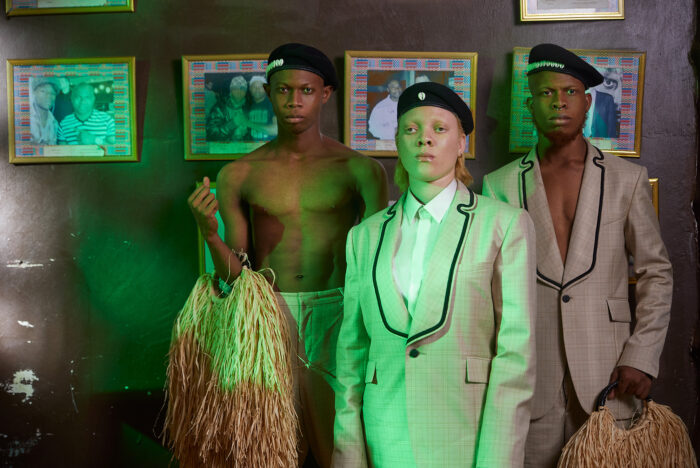 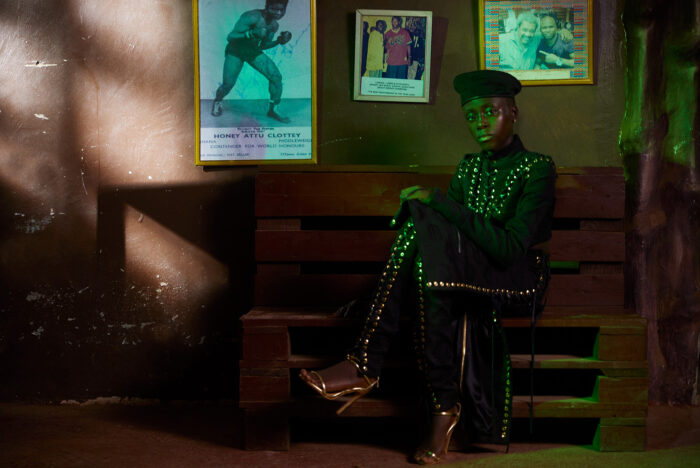