Symbol of elegance and prestige, I am a piece for special occasions. Made of beige wool and adorned with duchess satin strips, I assert my identity thanks to my strong and assertive personality.

Majestic and prestigious, I am Tuxedo.

This magazine, dedicated to fashion and music, highlights these two worlds in constant interaction and constant movement.
It responds to the needs of young urban people and other lovers of avant-garde and independent cultures.

The universe represented in Modzik is in real adequacy with that of the Maison French Deal. Fashion and music are two worlds that meet and give birth to Steeven Kodjia’s creations. The article presents the designer’s career, from his debut to the release of the Volume 4 collection, as well as the strong relationship between the brand and the artists. The photo of Nipsey Hussle, who wore the Sakassou jacket at the 2019 Grammy Awards, concludes the article.

Born from a blend of black, beige and burgundy lamb leather, I am unique in my genre. Dressing men for special occasions as well as for everyday life, I am an essential part of the French Deal Man.

My unique collar, adorned with a leather strap signed French Deal, gives me a singular and original look.

Refined and urban I am Advantage

Savoir Pour Faire aims to strengthen and honor French manufacturing and the small hands of the fashion and luxury industry. Through various actions, this company wants to transmit French know-how and train the new generation in artisanal techniques.

For its new communication campaign, Savoir Pour Faire highlights the unique expertise of the French fashion and luxury branch. Steeven Kodjia, founder and artistic director of the Maison French Deal is one of the ambassadors of this campaign, proudly bearing the values of craftsmanship, attention to detail and creation.

Watch the campaign video below.

Hip Hop culture takes an important place in the life of our designer Steeven Kodjia. It inspired him since the beginning and continues to guide him every day through his creations.

This playlist opens the doors of his daily life mixing passion and détermination.

Feel our vibrations in this new playlist!

Straight from the 90s, I jump into the future to live 2019. My cut is authentic, streetwear and chic at the same time. Timeless, I don’t follow fashion, I create it. My sporty look combined with a burgundy velvet lamb brings a bold and confident street-couture result.

French Deal is my rebirth, my new life. I am Old School Jacket.

Earlier this week, the graffiti artists DISK et XANE (@deaskone & @xanerlbn) designed part of the walls of our showroom. The two street artists realized graffiti with the effigy of the MAISON French Deal. Our wish was to symbolize and anchor our values in the walls of the MAISON.

The hip-hop culture mixed with the talent of these artists offers us new personalized artistic pieces in real adequacy with the brand’s identity. 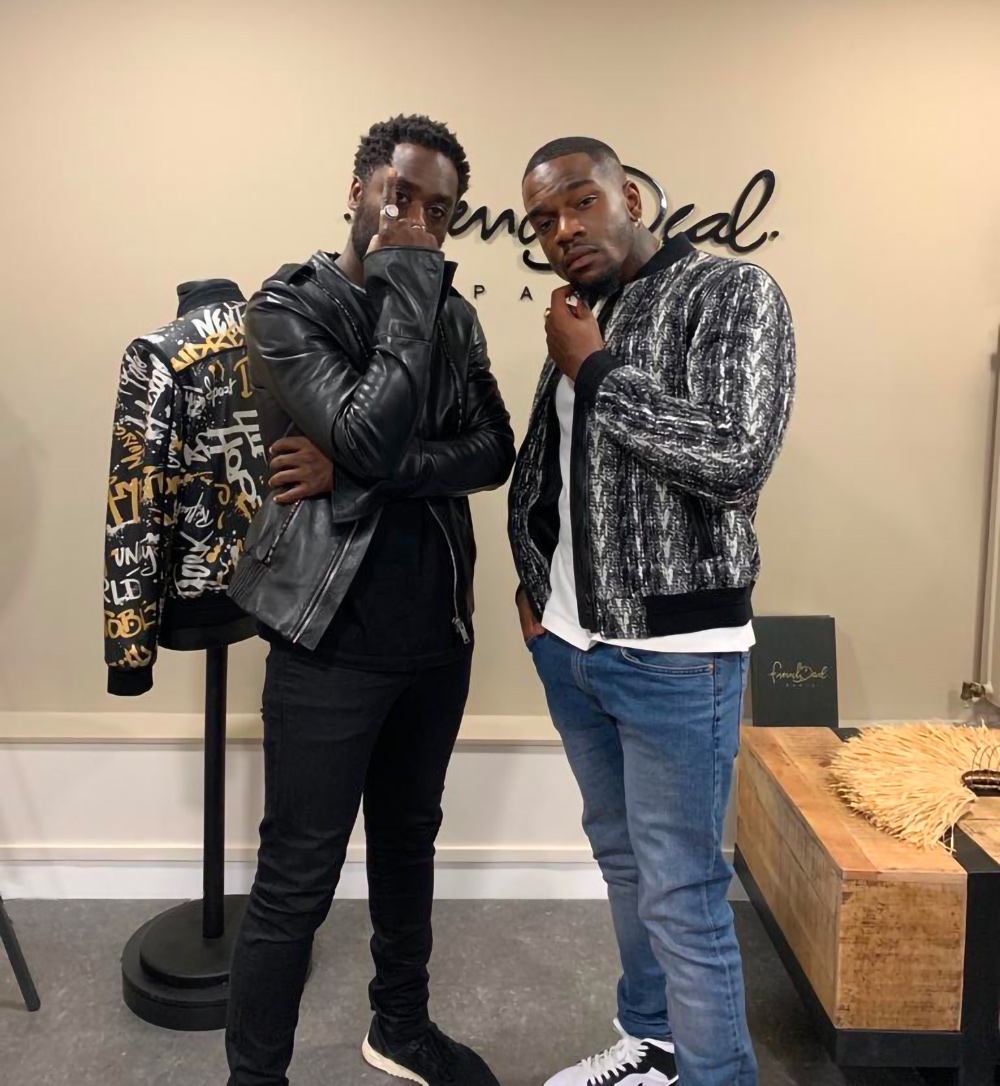 The artist Tayc visited the artistic director of the Maison French Deal, Steeven Kodjia, to share a privileged moment.

Following passionate exchanges on different subjects, this photo was taken to symbolize the meeting between two men sharing the same values.

Here, French Deal invites you to discover its universe through various articles. Two times a week and according to various themes, you are immersed into the DNA of the MAISON. Several subjects, inspiring the designer, will be discussed such as fashion, hip-hop, known-how, black culture, art and culture and of course Africa.

The whole French Deal team is delighted to share this new content, allowing you to learn more about the Maison and its values.

For the occasion, he dressed in a total French Deal look composed of the blue CARGO OSEI loincloth trousers and the blue AMIRAL jacket, also in blue loincloth.

Excellence in its purest form, I am far from being like the classic jackets. The original cut of my collar, a mixture of officer collar and tuxedo, gives me an exceptional look.

Entirely adorned with a duchess silk satin, I am both urban and chic. My name is a tribute to my culture and origins.

I am Black Excellence.

I was born from the love of my creator: Steeven Kodjia, for Hip Hop, fashion and Style.

Paying tribute to the dance troupe “O’TENTICK” of my creator, my pattern is a melody that rhythms my black guipure and my cotton poplin.

Atypical and creative, I am O’tentick.

For its second edition, Sky Blue magazine dedicated to men’s fashion highlights French Deal.
During the photo shoot, the model is styled with the Majeste Jacket.

Ian Mahinmi, co-founder of French Deal and NBA player with the Washington Wizards, wears French Deal before his game.
He wore the Essential Leather Jacket, specially customized for the occasion in a French Deal pink, and the French Coat with fur collar.
Ian also wore the 28 sweater, in reference to his jersey number, which was personalised with the emblematic French Deal graffiti motif.

Find all our collection on the e-shop.

Jeezy, with his partner Jeannie Mai, wears for the New York fashion week different French Deal total looks; the Black Excellence suit, the Majeste suit as well as a look composed of the Freestyle sweatshirt and the Saharan.

Find her looks in the different American media, OkMagazine, Celebreport and YBF.

The online magazine NOFI, highlights the French Deal house and its founders during its latest video. It features Ian Mahinmi, Ousmane Dabo and Steeven Kodjia, who talk about their careers, the brand and their inspirations. Mixing interviews and backstage images, the founders of French Deal share their background.

For the French Deal show on June 23, 2019, the online magazine Beside Sport was able to attend the backstage of the show as well as the rehearsals. Find here, the images of the preparation of the first show of the house, as well as exclusive moments.

Born in Rouen from a Beninese father and a Jamaican mother on the 5th of November 1986, Ian Mahinmi is a French professional basketball player, center for the NBA team, the Washington Wizards.When he first started, playing with the team from Le Havre, Ian Mahinmi is unknown from the public, but his talent will be recognized by the San Antonio team, the Spurs, when attending a NBA Draft.

Ian is only 19 years old, the Spurs, in order to have him continue his training in Europe, will make an agreement with his actual club so that he stays on 2 more seasons. He joins the Elan Bearnais team from Pau-Orthez in 2006 for one season before signing with the San Antonio Spurs the 23rd of August 2007. In 2010, he will then be transferred to the Dallas team, the Mavericks, where his energy will be praised by his team mates and staff members.

He will play one of the greatest game of his career against the Golden State Warriors in December 2010 with 12 points, 10 rebounds and 1 blocked shot. He then becomes the 2ndFrench player to be consecrated “champion” by the NBA.The 13th of October 2011, Ian will sign again with his initial club during the lock-out period, in-between seasons, before joining the Pacers from Indiana in 2012.

At the end the season 2015-2016, several NBA teams, convinced by his talent, will come looking for him. He will choose to join the Washington Wizards and will sign with them for 4 years.

“Hip hop, streetwear fashion and sports have been with me forever. These cultures are in constant synergy and influence one another. Today, even as a professional NBA basketball player and member of the Equipe de France, I always keep an eye out for new designers and, am always on the lookout for unusual items. I love bold combinations, my taste is anything but conventional. The instinctive take on fashion I share with my associates is what enables our creative expression. Joining the French Deal label was a natural choice.”

New performances during NBA pre-season for the co-fouder of French Deal, Ian Mahinmi. Find on NBC Sports Washington, a post about his games et his practice.

Jacques Faty, Franco-Senegalese footballer, and central defender of the CC Mariners of Gosford (Australia) alongside Ousmane Dabo and Ian Mahinmi

It’s also Fashion Week for French Deal: we opened our first showroom in Paris. This event was also an opportunity to present our third collection to our guests. Among them was footballer William Gallas, but also the former Miss France Corinne Coman.

Michaël Ciani, French footballer and defender of the Los Angeles Galaxy alongside the creators of French Deal

For this umpteenth tour, Steeven Kodjia has met several NBA players such as Myles Turner of Indiana Pacers, Evan Fournier and Bismack Biyombo of the Orlando Magic, and John Wall and Markieff Morris of the Washingon Wizards to introduce them Volume III

French Deal releases its new Sensation pants, discover it in this video!

French Deal to be honored on the American site Indianapolis Monthly